In Rudersdal municipality there is a greater focus on employee well-being and the work environment after they have entered a cooperation with Howdy. It involves three centers within Health and Social Services, which have joined the solution and given that these are large organisational units, they have chosen to test Howdy’s well-being application as a pilot testing project among 300 managers and employees spread out over the three centers. Center Chief for Social Efforts, Lene L. Petersen, is very positive concerning the cooperation with Howdy, as she sees possibilities for greater openness, reflection and dialogue among managers and employees:

“We had a meeting the other day with representatives across the entire organisation and there was great interest and curiosity in our new cooperation with Howdy—including among colleagues who are not part of the project but follow it from the sidelines. Everyone is very excited to see the surveys/reflections, which the continuous responses give rise to. There is a belief that having an easily accessible app-based solution at hand causes people to actually afford themselves time to focus on their well-being.”

A little over 60% of the employees in the project have already activated their profiles within the first month and have started to use the Howdy-application. The majority (95%) answer continuous questions on well-being and are therefore given feedback on their well-being and access to professional counseling if necessary.

“We have received very positive feedback from our employees. They think it is meaningful and we can also see that several have accepted offers for calls from both physiotherapists and occupational psychologists. The fast response from Howdy based on the entries the employees have left on the app has left a positive impression.”

Within the organisation, well-being surveys are usually carried out every other year. However, no tool has been able to present the organisation with an accurate picture of the well-being among the employees and assist it in intervening in the right places.

“It gets very general with the overall picture and is not a particularly useful took for the individual daily manager. When the employees subsequently have had to relate their experiences, it has not been accurate for their well-being but more of a reflection of the moment. The idea with Howdy is that we can make faster adjustments in case we discover dropping well-being curves and this is where Howdy has to prove its worth.”

Want to learn more about Howdy?

Sexism and violations in the workplace

Another relevant issue in companies – and generally in society, is the debate concerning sexism and violations in the workplace. In Rudersdal municipality they also seriously regard this problem and Lene views the cooperation with Howdy to achieve greater openness on the subject as well as feedback from individual employees on behaviour, which crosses lines, and the general language within the organisation.

“We have recently accepted the questions Howdy has launched about sexism and violations, which affords us the opportunity to ask the 300 involved with the cooperation once in a quarter if they have felt violated within the last few months. The questions are phrased very nicely. Among other things, the language in the workplace is addressed and that is a very good way to inquire about the culture. A lot of our units are primarily made up of female employees, so the men may be outnumbered, and it is interesting to learn about their experiences with the general social tone.”

Well-being during a pandemic

Covid-19 has left its marks on well-being with a lot of companies and in Rudersdal municipality the pandemic’s effect has been these past many months. In particular, it wears on the employees who work in the field among those who are most vulnerable and where safeguards and careful behaviour is a large part of everyday life.

“A lot of people are getting to be very Corona-exhausted. For the employees who have been sent home, working from home worked for a period, but over time the collegial social togetherness and the easy access to sparring have been missed. 90% of those employees who are part of the Howdy-solution work among the citizenry. They have experienced being tired and worn down. It Is very serious to work among those who in the very vulnerable category when it comes to Corona. Though the employees keep their spirits up and are proud that for the most part, they have managed to keep Corona at bay and avoided an outbreak.”

The organisation has previously learned, that there is a significant different in how well-being looks throughout the three different units. The Howdy-project is meant to provide insight and knowledge to the management group on where and how to intervene with the lowest well-being curves.

“We have been able to see that in the departments with changing hours, it makes a difference for their well-being. It is often more tiring to work on day offers, where employees have changing hours on weekdays and weekends, where well-being can frequently be lower than with those departments who work regular hours from 9-17. This is another point where we are very excited to see the results of the Howdy-surveys and how the project can help us intervene in the right places.”

Sick leave has to be reduced by half a percent

The great test for Rudersdal municipality is whether they can succeed with the preventive effort, which has now begun:

“It is an ambition for us to be able to prevent wear and tear, dissatisfaction and long-term sick leave among our employees and we expect that this well-being tool can help us learn and act in time. We have a goal to reduce sick leave throughout the organisation by half a percent and Howdy will help us do so.” 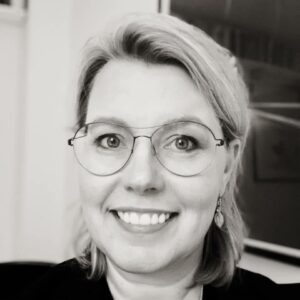 Interested in hearing more about how we can reduce the sick-leave and improve the wellbeing in your company?